Are you hitting your goals for this year?  Here we are in the second quarter of 2015 already.  I just did a review of my goals and am reminded how far behind I am in some areas I thought were important.  I wanted to have the new workbook to accompany the 10th Anniversary Edition of 48 Days to the Work You Love ready by January 1st – and I’m just now finalizing it.  I wanted to have dropped 15 lbs but I’ve bounced up and down with cruises and lots of airline travel.  Just excuses, I know. 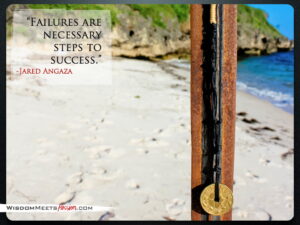 But here’s the question: Did I “fail” in that area?  I don’t consider that failure since I’m a whole lot closer than I was on January 1st.

“Set your goals ridiculously high and you will fail above everyone else’s success.” – James Cameron, Academy Award-Winning Director

I love the thought here.  If you decide you are going to run three marathons this year – and you fail by only running two, you have still accomplished more than 99% of the people in the world.

Do you have a goal that is so “ridiculously high” that even if you only hit 50% of it you will still bypass everyone else?

“A life spent making mistakes is not only more honorable but more useful than a life spent in doing nothing .” — George Bernard Shaw

Where are you behind where you thought you’d be at this time?