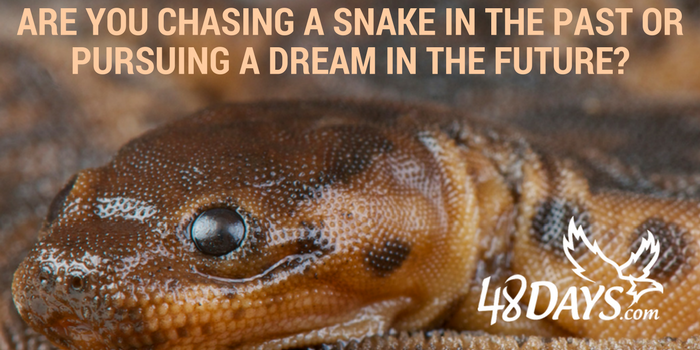 When I was 10 years old, one of my best friends was Bob Queen.  One afternoon while exploring the back acreage of our farms, a snake bit Bob. Seeing the snake slither off, my immediate response was to run after the snake, track him down and repay the scoundrel for what he had done to my friend.  Bob, however, being a much wiser hunter and outdoorsman, quickly pulled out his knife, lanced the bite, sucked the blood out and spit out the poison.  The focus for him was on his own well being, not on repaying the snake.

How often I see people chasing the snake in their own lives.  The business fails, the company folds or you just simply get laid off.  The immediate reaction may include anger, resentment, bitterness, and backstabbing.  These lead to discouragement, frustration, guilt and depression – and sometimes stupid acts of revenge.  Be aware that all of these reactions and feelings focus on the past.  Turning around and looking to the future opens up confidence, boldness, and enthusiasm.  These often lead to an increased sense of accomplishment, personal control, fulfillment and even money.

If Bob and I had chased that snake, the poison would have been given opportunity to plunge through his veins, draining his energy and perhaps leading to his death.  What are you doing in your life?  Are you chasing a snake in the past or pursuing a dream in the future?  Choose carefully; your life may be at stake.

It’s easy to be upset about what you’re going FROM, but the release of anger and frustration occurs when you get a clear plan of action for what you’re going TO.  When circumstances are not what you’d like them to be, use the line from my friend Gail Hyatt: “What does this make possible?”