The merry-go-round of my professional life

“Dan, the merry-go-round of my professional life has left me no farther than a few steps from where I got on and now with a weak stomach.”  Thus began the description of life from a very “successful” attorney.

Many times a career path starts because of circumstances, rather than priorities.  Family expectations, chance occurrences, a friendly teacher, or seeking money can lead us down an unfulfilling career path.  It’s tough to make good choices at 18 that will be meaningful at 45.  Just recently, I saw a 44-yr-old client who opened with the comment, “I’m tired of living my life based on the decisions made by an 18-yr-old.” 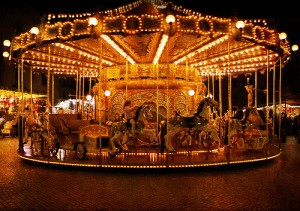 If your work life is not providing a sense of meaning, purpose and fulfillment, draw a line in the sand.  Decide what the ideal day would look like; how you would spend your time, what skills you would use.  Money is ultimately never enough compensation for investing one’s time and energy.  There must be a sense of meaning and accomplishment.

And a surprising thing frequently happens while making a fulfilling and worthwhile contribution – rather than learning to live on “beans and rice” there is often the release of a financial flood.  A former pastor, who is now a well-known artist, relates that his income is 8-10 times what it was previously.  And this while finding authenticity in his God-given calling.   The frustrated corporate executive who is now a web content and book writer tells me that she has reduced her work week hours by 2/3 but has increased her income 3 times over.  Scott Adams escaped the cubicle and became a multi-millionaire with his “doodling.”

You’re a different person after 10, 20 or 30 years in the workplace.  You should know more about yourself and you certainly are a candidate for things you were not at the beginning of your career.  Maybe it’s time to take a fresh look, realign and move into the most productive and profitable season of your life.

Life is too short for “merry-go-round” sameness.  Believe that a life of purpose and meaning is your best source of financial success as well.  I hope it’s no secret that’s it’s easier to make money doing something you love than doing something you hate.  Success is not an accident.  It’s the result of careful introspection, planning and taking action.