Tim Bishop, a 48days member, and his wife, Debbie, are bicycling across America in support of TheHopeLine, for which they both volunteer as hope coaches. They’re currently in Ohio, just past where I grew up. TheHopeLine is a Christian organization that reaches, rescues, and restores young people ages 13-29 through radio, Internet chat, and a 1-800 number. In 2013 alone, TheHopeLine intervened in the lives of over 3,000 young people who were struggling with suicidal thoughts. TheHopeLine is headquartered just south of Nashville. You can learn more about Tim and Debbie’s mission and how you can become involved on the tour status page of their blog.  If you’d like to guest post on this blog, check out the guidelines here.

My left brake handle was acting up yesterday. And since we had a bicycle shop just down the street, it seemed prudent to have the bicycles checked out. The mechanic was able to troubleshoot my brake problem quickly. And, as good mechanics do, he was able to find other issues that neither Debbie nor I would have found, and fix them before they caused more serious troubles down the road. 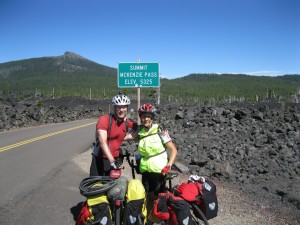 As he worked on the two bikes, we talked about our tour, since he was quite interested in how things were going. When we admitted to our deficiency with mechanical matters, he made this comment: “Anyone who goes on a tour of this magnitude should be able to completely tear down and rebuild his own bike.” His comment may simply have been an expression from his strength as a mechanic, but it immediately struck a chord within this non-mechanic.

I didn’t challenge his assertion, but I knew it was not true. For, we’ve already been on two long tours before this one and come home to tell about it. We’ve not had a roadside crisis requiring intensive mechanical expertise, but if we had, I don’t think we’d have been stranded in the middle of nowhere without somebody coming to our assistance.

I thought about his comment throughout the day. I think it represents why many people do not pursue their goals and dreams. Sometimes, over-preparing is just an excuse for underperforming.

Just yesterday, we met a most pleasant couple on the bike path in London. They were in their early 70s and still riding long distances on their recumbent bicycles. The man didn’t have many regrets about his life, but he did regret not bicycling across America. He said he was too much of a chicken. Well, I’m a chicken too, but that didn’t stop me. Yet, I must admit that having Debbie with me is a big difference maker. 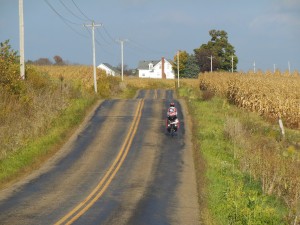 You can’t have everything lined up in perfect order before going on a bicycle trip, or before pursuing any worthwhile dream. People have different strengths, and you’ll never have everything under control. If you did, you wouldn’t be human.

Rather than focusing on your limitations and allowing them to hold you back, allow your passion to fuel your pursuits, and then acquire the missing expertise along the way. Exercise the necessary due diligence and precautions ahead of time and along the way, like buying reliable equipment and stopping at a bike shop periodically for preventative maintenance. In the end, however, you’ll need to trust God for those things you can’t anticipate or simply can’t control. Otherwise, you may never aspire to, and be willing to pursue, what you were called to do.

It takes humility to ask for help, and you’ll usually find that help is there right around the next corner just waiting for the request. It’s part of God’s provision as you walk in obedience with your passion. No one can achieve their dreams without help from other people. To involve them is to honor them.

So, we won’t be learning how to rebuild our bicycles anytime soon. Although it might be interesting and helpful, we’re too busy trying to pedal them—and trying to raise awareness and funds for TheHopeLine. It’s what we were called to do.

What about you? Are you over-preparing or underperforming?

Stop being so successful
July 27, 2017
Categories