Will you give this guy two dollars? 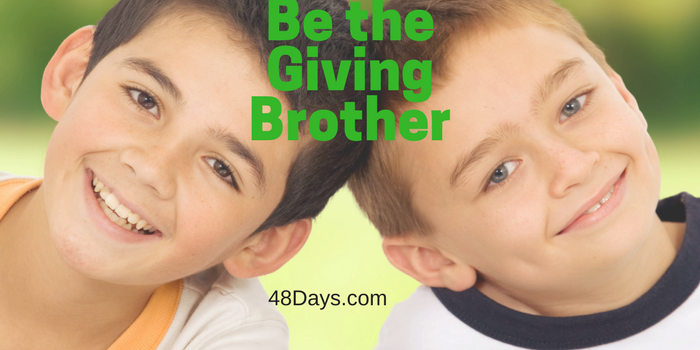 There is a story of a little boy who was admiring a shiny, brand-new sports car parked on a quiet street.  He slowly walked around the amazing vehicle, savoring every angle.  As he pushed his nose up against the window to get a better view of the inside, the voice of the owner coming up behind startled him.

The proud owner said, “My brother gave it to me for Christmas.”

“Your brother gave it to you?  Didn’t cost you nothing?” the young boy asked.

“Wow – I wish….,” the young boy began.  And of course Bob knew how he would finish the sentence  “……I wish I had a brother like that.”

But Bob was stunned when the little boy said, “I wish I could be a brother like that.”

Just this week I talked to a gentleman who is grieving the recent death of his mother.  But rather than sharing that grief with his brother and two sisters, they are already involved in a horrendous fight about dividing possessions.  None of them are in need, but the thought of getting something for nothing has erased family ties and apparently all civility.  Instead of being generous, they have allowed greed to wipe out compassion and long-standing relationships.

Which brother are you?

What was your first instinct?  Are you waiting for a hand-out from the company, the government, the lottery, or an inheritance?  Are you hoping for an unexpected and undeserved gift to make your life better?

What would it feel like to be able to give a car to someone?

Or a house, a bag of groceries from the store or two dollars to the guy selling newspapers on the corner?  Build your giving muscles rather than your fighting, taking ones.  The default position is to want to be the person who receives.  It takes intentionality and a mindset of abundance to want to be the one who gives. [Tweet This] But that will open doors of opportunity that most people will never experience.