What would happen if everyone did work they love?

Here’s a common question from a 48 Days Radio listener:

Hi Dan!  There’s something that subconsciously troubles me about the notion that we should all do work we love.  Part of me feels guilty trying to focus on my passions knowing that at the end of the day, we NEED people to work in slaughter houses and be janitors etc.  Obviously, janitorial work is very important, but are there really people with a passion for feces?  If everybody applied your philosophy how would the “dirty jobs” get done?

Great question!  Reason would tell us that no one would want to clean toilets or pick up trash or milk cows at 5:30 AM.  And yet I am constantly surprised at the joy some people doing those very things seem to have.  If you and I go to a Nashville Predators hockey game there will be a break when a couple people rush out on the court to clean the blood, spit and who knows what else off the glass backboard.  Personally I can’t think of too many things more disgusting, and yet I know people who would pay money to have that opportunity.

Recently I was on a radio show out of Chicago.  A guy called in who worked for the water company.  He spends most of his days fixing frozen water pipes.  Can you imagine anything more miserable?  This guy loved his job.  He was a hero day after day – showing up at houses where they had no water and he had the privilege of taking care of that.  You could hear the pride in his voice as he described his daily work.

Here’s the deal:  There is no such thing as bad work – only work that doesn’t fit certain people.

Yes, it’s true that nearly 80% of people complain about their work and say they’d change if they could.  And most of those people will continue in work they don’t love – because they won’t take the time to look inward, understand themselves and create a clear plan. 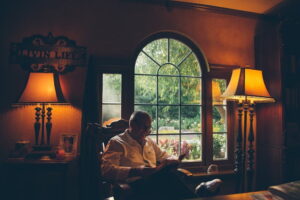 Don’t feel guilty for doing work you love.  That’s a very individualized experience.  I work in a converted barn in a field just outside Franklin, TN.  Lots and lots of people would go nuts working in the solitude that I thrive in.  I think and write – activities that don’t put me in contact with people for sometimes days on end.  Some of you would hate that.

Don’t force yourself to do a job just because you know we need someone to do it.  Regardless of what that is – I’m confident someone else will love the opportunity – or be willing to do it just for the paycheck.  That’s not you; you’re too smart to settle for less than work that is fulfilling, purposeful, and profitable.