Life gives to the giver and takes………

Recently Joanne and I had dinner at one of our favorite restaurants.  This restaurant opened last April – in the same location as a previously failed venture.  They need an ongoing staff of about 35 people.  In the 10 months since they have been open they have hired in excess of 850 people. 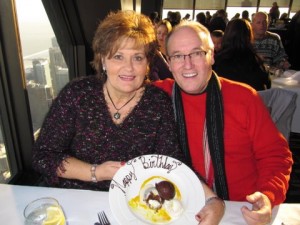 That means some worked two weeks, some 30 days, and some left at their lunch break on the first day of work and never came back.  (There is actually a name for that common phenomenon – it’s referred to as going to “the Burger King in the sky” – where someone goes to lunch and simply does not come back.)  The server we request at this restaurant began there when they opened and has been there ever since.  Now this is a guy who has a full time job at a local manufacturing plant – but he enjoys the environment in the restaurant – makes friends with those he serves and builds relationships with many people like Joanne and me.  I was asking him about all the new staff every time we come in and he told us a little of the history I’ve related above.  He also told us that at Christmastime he had the privilege of serving several company and family parties there.  One in particular bears retelling here.  A physician brought his staff in for their annual party.  Of course he had made a reservation in advance and had requested Clay as their server.  At the conclusion of the meal the physician left a generous $300 tip.  On his way out after all details were completed he slipped Clay another $1000 for his exceptional service during the evening.  So here’s a guy in the same environment as 850 others who came and went – confident that there was no real opportunity there.  Some heard about a friend who made $100 in one night working at Chili’s.  Others grew impatient with the demands of an unrealistic customer and walked off – not willing to be treated like that.  But in the midst of that – one guy saw his own unique opportunity and has thrived in the same place.

That reminds me of another business story.  A couple of years ago I talked to a guy after a seminar who had a landscape design and lawncare business.  He complained bitterly about lack of access to working capital, the stupid customers who didn’t know what they wanted and then weren’t happy with the final plan, and their slowness in paying.  A couple of weeks later he called me to tell me he had filed bankruptcy that morning and was closing his business.  That same afternoon I happened to talk to my lawncare guy.  He started his business with a sixth-grade education, bought his first truck for $600 and has grown his business carefully.  He told me how he had just raised his prices 10% and did not lose even one customer – and how his customers give him great ideas.  One had just offered to build a warehouse for him in exchange for future lawncare – and he wanted my advice on maybe having 4 apartments in the upper floor of that building that he could rent out to his own workers.

Both of these businessmen were operating right here in Williamson County – both had the same market conditions, the same customer pool and the same opportunity.  Yet one was going bankrupt and one was thriving and expanding.

Do you get the sense that opportunity may not be an external thing?  No, opportunity lies squarely between our own two ears.  The apostle Paul told the Galatians: “Let every man prove his own work.” The Living Bible gives this passage a particularly colorful translation: “Let everyone be sure that he is doing his very best, for then he will have the personal satisfaction of work well done and won’t need to compare himself with someone else” (Gal. 6:3-4).  This morning in an interview I heard Joe Polish share the common quotation, “Life gives to the giver and takes from the taker.”  Make sure you’re giving beyond what is expected in your job or business.  Life is just waiting to give you more.