Can You Introduce Me to Pat Flynn?

This is a guest post by Kimanzi Constable, a former bread delivery guy who self-published two books that have sold over 86,000 copies. In the last year he has lost 170 pounds and moved his family to Maui, Hawaii. You can usually find him writing while enjoying an ocean view. He is a published author, international speaker, and coach. He’s a contributing writer for The Huffington Post, Entrepreneur Magazine, and Mind Body Green. He is a senior editor at The Good Men Project. His mission is to help men and women create true freedom in life. Join him at KimanziConstable.com and on Facebook at Kimanzi Constable. If you’d like to guest post on this blog, check out the guidelines here.

Can You Introduce Me to Pat Flynn?

The last eight months have been amazing. Wait, that’s an understatement, they’ve been incredible. I have done things I thought were impossible. You’ve probably seen my story somewhere, so I won’t bore you with it. I’ve written about it here on Dan’s blog.

In 2012 and 2013, I built an audience through guest posting. In those two years, I guest posted over 70 times. In mid 2014, I
realized my go-to strategy wasn’t effective anymore. Most large blogs don’t take unsolicited guest posts. Besides that, I wanted to take Dan’s advice and continue to think outside of the box. 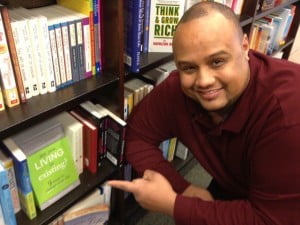 I thought about where I wanted to see my writing and immediately the Huffington Post came to mind. At first, those pesky doubts creep back into my mind but I ignored them. I started to research how to contribute to the Huffington Post. I didn’t stop there.

It took a few months and some strategy, but I was able to become a contributing writer for the Huffington Post, Entrepreneur Magazine, MindBodyGreen, and the Good Men Project. I am now a senior editor at the Good Men Project. My writing has also appeared in Business Insider, Yahoo, and NBC News.

As if all of this wasn’t cool enough, a few weeks ago I had the privilege of being a guest on Smart Passive Income with Pat Flynn.

Writing for large websites had grown my email list from 3,000 people to over 17,000. I have more social media followers, and my business has doubled. Being on Pat’s show however, had unexpected results. In two weeks I’ve added over 1,600 new email subscribers and again, more business.

As you can imagine, I’ve also gotten a lot of email. In two weeks, there have been over 1,000 emails between SPI listeners and my audience. As I was going through these messages, I started to notice a pattern. It was so glaring I started to keep track.

There were a lot of questions in the emails. I put these questions in a spreadsheet as research for future content. When I got the same question, I added the numbers. Looking at the numbers, here are the top two questions:

When asking hurts you

I know how frustrating it can be building a business. It took four years and a lot of tears to get here. One thing that I’ve learned along the way is that your ask can’t exceed the relationship.

I was at a conference last year and heard a speaker explain this eloquently. She asked a guy in the audience his first name. He said it was Mike. She then said, “It’s nice to meet you Mike, can I kiss you on the lips?” The crowd erupted into laughter.

She went on to say that this is what we do with relationships, and especially with other entrepreneurs. We haven’t connected with them at all, yet we ask them for information they either paid to learn, or took years to figure out. We are essentially asking for that kiss on the lips.

It would be nice if someone could introduce you to an editor or Pat Flynn, but not if your relationship with that person isn’t developed to that level. I have never met these people who are emailing, never had any interaction with them. Our first interaction is their asking me to give them a shortcut that took four years to achieve.

Most of those emails got deleted. Not because I’m a jerk, but because they want that “kiss on the lips.” I’ve even had some A-Listers—who I’ve never talked to—ask for an introduction. One of them tried to take advantage of me.

How to connect and build

There’s a better way to connect with successful entrepreneurs. It starts with studying and applying their free content. They work hard to produce that free content, and are impressed and happy when you use it successfully. Buy one of their courses. Show them you understand the value of what they provide. While everyone else is trying to “kiss them on the lips,” you are separating yourself by showing how much you value what they do.

Use their content and share it. Thank them publicly and tell them what results you’ve gotten. When I say publicly, I mean using social media. Successful entrepreneurs get hundreds of emails, and most of them as self-serving. Tweet to them. Comment on their Facebook fan page. Leave a meaningful comment on their blog. Make it brief but powerful.

Try to establish a relationship. I’m not saying you have to be their best friend, but you have to build some familiarity. Don’t approach influencers the way everyone else does.

Use the same principles you’ve used in romantic relationships. Start with a conversation either online, or at a conference. Shake their hand, exchange a hug. Build from there- that kiss will show up.

Your resume scares us
August 10, 2018
Categories