Maybe your opportunity looks different than what you expected

The first Avon lady was a man.  David H. McConnell was a big city bookseller.  In 1892, when the perfume he used to reward loyal customers proved more popular than his paperbacks, he dumped the books and began promoting only the perfumes.  McConnell’s next smart move was assembling a workforce composed entirely of housewives.  In contrast to the then prevalent door-to-door salesmen, Avon ladies made friends with their customers and were not the creepy blue-suede-shoe guys that most people expected to see knocking at their doors.  By recognizing his true market and how to best relate to his customers, McConnell made a fortune, and so did many of his Avon ladies.

How many businesses do you know of today that continue to do what they’ve always done, even in the face of a changing market?  If you sell appliances and a WalMart opens next door, you may find a shrinking opportunity to sell appliances but an exploding market to repair and service them. 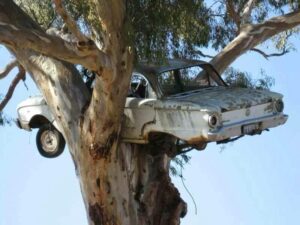 If every yard you mow has a tree stump that needs to be removed, you may discover that rather than just being one more yard service, you have a unique opportunity in stump removal.  A couple of days ago I wrote a post about the osprey nesting outside our window where we’re staying in Nokomis Beach, FL.  A friend sent me this picture of a “falcon in a tree.”  (Being a car guy I cracked up.)  Sometimes our opportunities look different than what we were expecting.

A couple of years ago, I worked with a gentleman who had been selling fabric to major apparel manufacturers.  He observed that any flaw in the fabric rolls caused it to be sold for scrap.  He quit his “normal” job, began buying and cutting the scrap fabric into squares to be used as rags.  Body shops, auto dealers, and parts stores demanded his product faster than he could produce it.  He got a contract with Dollar General to provide the rags packed in plastic bags.  He now employs seven neighborhood women to help him stay ahead of this unique opportunity that was right under his nose.

Our changing work environment is shrinking many of the old business and work opportunities.  Even Avon is finding resistance to the knocking on doors model as more and more people purchase on the Internet.  But with every change there is the equal seed of new opportunity.  The maker of Levi’s was an unsuccessful gold miner who recognized that the other miners needed more durable pants for their digging activities.

Is there a hidden opportunity in the changes being forced on you?