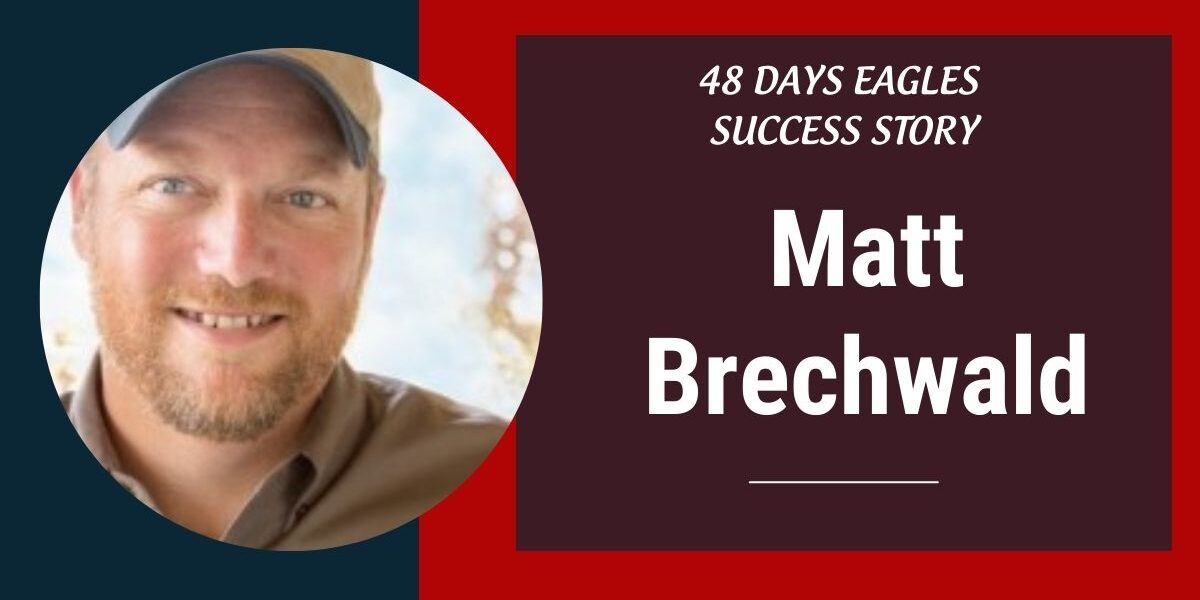 Some of the stories that circulate in the entrepreneurial world follow people who have made a dramatic shift in their working life. But often, jumping from a full-time career to being a full-time entrepreneur looks more like turning a large ship—it’s done over the course of time through a series of decisions that build on each other.

Today, I want to share with you the story shared in our 48 Days Eagles Community recently.  Matt Brechwald transitioned out of his career as a police officer and into full-time podcasting and agricultural entrepreneurship through making smart decisions, prioritizing connections, and chasing after a dream he knew he was building over the course of a lifetime.

Matt Brechwald Was Facing Burnout With His 9 to 5

Back when Matt was a police officer, he told us that “I was burning out and dreaming of a lifestyle, but I didn’t know how to attain it. It was so painful for me at times that I wouldn’t even allow myself to really dream about that lifestyle. I had just been getting frustrated thinking that other people get to live that life and I don’t. But I never quit looking for resources.”

First, a Side Business

Back then, he had started a side business for removing gophers from people’s property. That’s a big problem for property owners in his area of the country, and Matt was able to develop equity in that business that set him up for success in his first of several transitions into full-time entrepreneurship when he eventually sold it.

Matt told us he had reservations about coming to Franklin. It was a long trip, and the payoff at the time seemed uncertain. But he had also been producing this podcast on the side, and he told us “about 3 days before I was scheduled to fly out to Franklin, I got a call from one of the producers at Rural Radio and they told me about a show they had called FFA today.”

These producers wanted to run his podcast episodes on their satellite radio channel! Matt saw this as a breakthrough for one of his several streams of income. And he took it as a sign to jump in and learn more about what he could do in this space by joining us at Coaching with Excellence.

With every new opportunity, Matt saw that lifestyle he used to dream of coming closer and closer into view. He told us that his dream was “to be self-employed and in charge of my own destiny” because “what killed me about being a police officer was the clock.”

Getting off that clock and into the driver’s seat of his own destiny wasn’t just one decision—this was a series of decisions for Matt.

He created a model where he was able to refine his business over time because he had multiple streams of income. With those multiple streams, he could replace them, add more in, and move them around with flexibility on his entrepreneurial journey.

“I’ve been through this transition twice,” Matt told us. First he had to know when it was time to leave that full-time job as a police officer behind and devote his time to being an entrepreneur. Then, as his podcast grew and became more popular, Matt thought “well if I can do custom content for them [Rural Radio], I wonder if I could do custom content for other people.” This led to Matt’s second transition into doing his Off-Farm Income Podcast.

Matt told us that “I’m no expert in any one thing. I know a little about a lot, which is why I get to podcast for a living because I think that’s a great recipe for a podcaster.”

Matt and his wife learned even more about a lot of different things when they bought a 25-acre farm. They started raising livestock, fixing up the place, and discovered a whole new world of opportunity in agricultural entrepreneurship.

For example, when hay prices were “through the roof” Matt and his wife leased parts of their land for others to cultivate. Now, they’re direct marketing livestock, and servicing new communities like the refugee and immigrant community in their area who are looking for different types of livestock than the typical American consumer.

This small farm became a source of several more streams of income for Matt and his family as they dove into agricultural entrepreneurship. And the active involvement in small farming gives Matt a special connection to his podcast topic and his listeners.

The expertise that Matt developed in his own farming, especially through raising and marketing goats, allowed him to develop resources and courses to teach others how to do the same thing. These resources are massively helpful to both other small farmers like Matt, and to Future Farmers of America students who are looking at starting their own farms or getting involved in agricultural entrepreneurship.

Building Connections and Giving Back

Now, Matt’s resources have blossomed into an online course that’s available to FFA students in several states! He told us that it’s “just incredible” some of the businesses that these students start. And Matt gets to see the fruits of his resources up close every year when he attends the national FFA convention.

Matt takes that opportunity to connect with his past podcast guests, meet new guests, and stay plugged into the FFA world. As he told us, he gets a “media pass” at the FFA convention, and most people with those passes are looking to do quick interviews and write short stories about the event because there’s over 800,000 FFA students in the United States, and thousands attend that conference.

There are certainly a lot of stories to be told from that event, but those quick interviews just aren’t Matt’s style. His podcast is a long-form interview show, and he wants to take the time to connect with each and every guest.

Unlike some other media people at the FFA convention, Matt isn’t there to get the soundbites—he’s there to build connections, be available as a mentor, and, as he put it, be “a cheerleader” for these incredible students.

I love how Matt thinks about the FFA convention. He’s not the type of entrepreneur who’s looking at everything he does and thinking about how he can monetize it. Matt’s business and his podcast are based on people and their stories. When Matt’s there, he’s celebrating the achievements of those in the community, and making connections that benefit everyone involved. As he told us “It’s just the most rewarding part of what I do. It’s unreal.”

Sowing seeds in the community have really borne fruit for Matt. By building these connections and being available and present in FFA and the small-farming community, he’s been able to grow a base of listeners and a community in his niche. Now, Matt supports his family just off of his Off-Farm Income podcast and the ventures that he’s started.

What I want to leave you with about Matt’s story is something he told us on the Monday Mentor call:

“Everything’s been bootstrapped. It’s all been incremental.”

If you’re looking to make a change or start your entrepreneurial journey, you don’t have to do it all in one fell swoop overnight. Realizing your dreams for your work and life can take years—but over those years you can also be building something great.

Matt started out as a burned-out police officer, punching the clock and dreaming of a better life for himself. Now, over time and with strategic decisions, he’s turned a side-hustle into a full-time career. As he told us, “as the success grew, as the opportunities grew, and the ability to monetize other things grew, I was able to move that into my full-time career.”

Sometimes you have to plant the seeds of the world and life you love, tend to them, and wait for them blossom into your dreams.

Check out other 48 Days Success Stories:

• From Potential Job Elimination To a Thriving Side Business — Marianne Renner Changed Her Mindset and Her Life. Here’s How

• Helping Others Thrive is the Hallmark of Her Success — Coach, Speaker and Trainer Jevonnah Ellison

Are you really dreaming of retirement? – Rich Allen
June 8, 2022