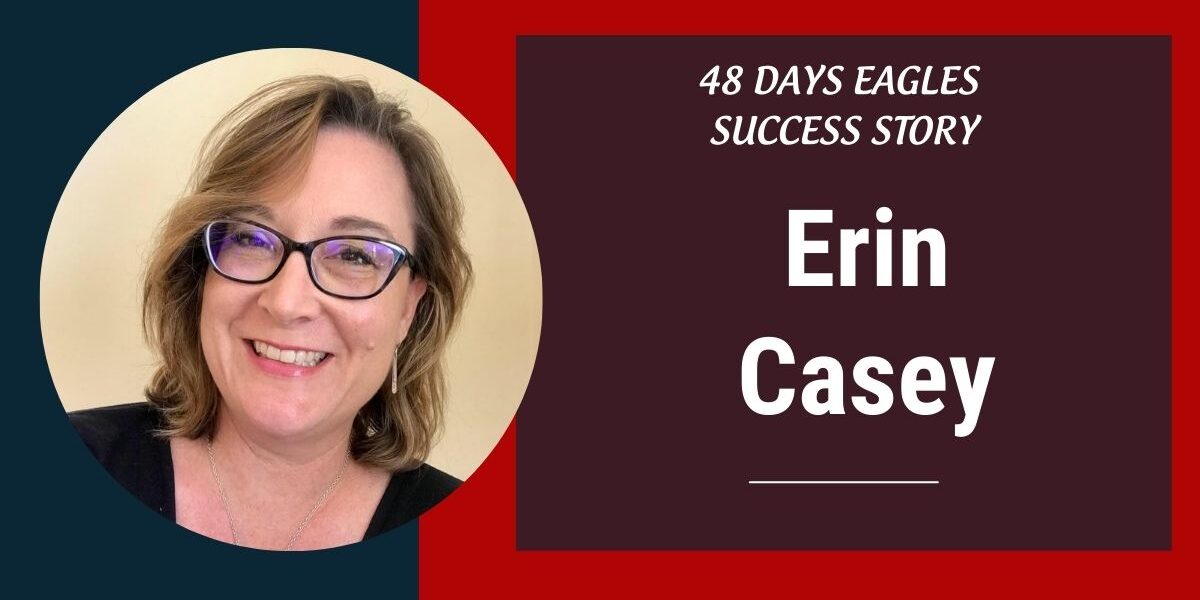 Erin Casey is an Eagle that I go way back with, and that I’ve had the privilege of watching blossom into the incredible entrepreneur, coach, and encourager she is today. Erin is a writer by trade, and over the course of her career she’s been able to leverage her skills, connections, and passions to build a business that supports other writers on their journeys to becoming authors.

Whether you’re a writer or not, I think Erin’s story will be important for you because no matter what it is you do—it’s not just your craft that generates income, but how you apply it. And Erin’s story is all about how she built the work and life she loves by applying her craft in a way that’s right for her.

In her own telling, Erin took a “non-traditional” route through her early adulthood and education. She got “married at 18 and divorced at 20-something” Some might see that as a rough start, but Erin told us that “it was a good thing for me, actually, because I had a break where I figured out what I wanted to do.” When she went to school for the first time, Erin wanted to be an elementary school teacher, only to find out later that path wasn’t for her.

After making the shift in her education to studying journalism, advertising, and graphic design, Erin found a love of writing that continues to propel her career today. But to study that craft in college, Erin had to transfer to another university, as a single mother. She stayed persistent in her studies, though, picking up a double major and double minor. When she got out of college, Erin’s non-traditional path actually helped her land some of her early jobs in advertising because she had education in everything from writing to visual arts.

But what Erin really wanted to do was write and be a managing editor. She still had to prove to prospective employers that she could do that. She started writing for some small publications through an advertising position she landed. Her work at that publication and connections she made there helped Erin make her way into writing for SUCCESS Magazine.

“One of My Big Desires Was To Be Location Independent”

For some people, being a staff writer for SUCCESS Magazine would be a dream come true, a forever career. But Erin told us that she “learned along the way that one of my big desires was to be location independent.” To realize that desire, Erin started writing for SUCCESS Magazine more as a freelancer or independent contractor, which gave her the freedom and space to be both more location independent and open to other writing projects.

Here’s where I want you to really pay attention to how Erin applied her craft in the ways that were right for her. That openness she found as an independent contractor allowed her to adapt more easily to the changing market for writers, as publications like SUCCESS Magazine shifted from print to digital publication. As Erin told us “opportunities in writing have changed dramatically” since she’s been in the business. And Erin’s been able to ride the changing tides in the writing world because she’s so in touch with her passions, skills, and abilities.

I first met Erin back in the early 2000s when she was writing full time, before she went into writing as an independent contractor. She attended an event we held at our previous location in Tennessee and went on to be part of one of the 48 Days Coaching With Excellence programs. Her goals back then were to write a book, and she was working as a contractor, in her words, “way, way, way too many hours” to do that. Erin recalls me telling her that “you can’t ramp up forever” and that stuck with her. She knew she needed to find more freedom in her work and life to pursue projects that made her feel fulfilled.

The thing that was holding Erin back from moving from full-time writing as a contributor to doing freelance work was, as she told us, “I didn’t want to let go of that paycheck. It was stressing me out because I was building my own thing on the side and trying to manage the responsibilities that I had with the company.” Through those responsibilities she had writing full-time, Erin actually made a lot of important connections with entrepreneurs and authors that helped her build her side-business into something that made her feel more comfortable letting go of that paycheck.

For example, Erin did a profile of Kent Julian, who is now our Dean of Speaking in the Eagles Community. And she tapped into that connection and others to build her own business. As we talked about on the Eagles Monday Mentor call with Erin, no one can be successful in isolation. Connections and networks are vital for entrepreneurs, and Erin leveraged her connections to get in touch with the support network she needed to write her first book!

Using What You’ve Learned On Your Journey To Help Others

Erin went on to write a book about her faith story and her work as a missionary in Ireland. She told us that “I had never really learned how to share my faith story. So for me, writing is very often a way that I learn.” Now, in her businesses, Share Your Faith Story and My Writers’ Connection, Erin uses what she learned writing on her own journey to help others do the same. Her focus today is “helping people produce really top quality books.”

She learned how to do that, and what a top quality book looks like, over the course of her career as a full-time magazine writer. Erin wrote book reviews, and a lot of books came across her desk that were poorly presented and not ready to be put out into the world. From that experience, Erin developed a solid understanding of what “ready for publication” looks like and, as she told us:

“my heart really became to help authors write and publish with excellence and with confidence that they were going to be producing something that looks traditionally publishable. Even if they’re doing it for themselves.”

You Don’t Have To Reinvent Yourself To Be Successful

Even if you’re not a writer, Erin’s story is so important and instructional because it shows how important it is to leverage and apply your craft in the way that’s right for you. A lot of people think that going into business for yourself means totally reinventing who they are and what they do. Certainly you can do that, if you want—but you don’t have to. We all have skills, talents, and abilities that can be used to build careers that are fulfilling.

If you’re feeling unfulfilled in your work right now, I’d challenge you to analyze whether you’re dissatisfied with what you do (your craft) or how you’re doing it (your work or job). Erin’s story shows us how it can really be the latter that we’re not happy with, and that we can apply what we do in ways that better serve who we are and what we want in life.

You can find out more about Erin’s work at My Writers’ Connection, where she coaches authors on how to produce work that reflects their full potential; at Share Your Faith Story, where she helps others speak authentically about their spirituality through writing; and The Roaming Texan, where Erin shares her photography and travel blogs.

• From Potential Job Elimination To a Thriving Side Business — Marianne Renner Changed Her Mindset and Her Life. Here’s How

• Helping Others Thrive is the Hallmark of Her Success — Coach, Speaker and Trainer Jevonnah Ellison

Are you really dreaming of retirement? – Rich Allen
June 8, 2022