I demand you double my pay

McDonald’s workers are demanding $15 an hour and the right to form their own union.  Okay, so how is this going to work.  The minimum wage is now $7.25 which is what some McDonald’s workers receive.  So what they want is an immediate doubling of their pay.

Isn’t pay a function of how easy you are to replace?  If there are other people standing in line to take your place how do you demand an increase in pay? 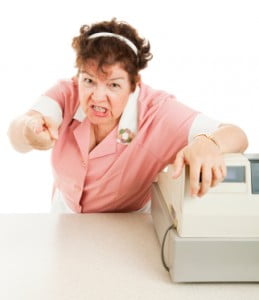 Here are some of their spokespeople:  Darius Cephas is 23 years old and has been working at McDonald’s for two years.  He says that if he were 6 or 7 years younger it wouldn’t be a problem but at this stage of his life he can’t live where he wants to live and pay his food, phone and utilities.  And get this – “I still have to pay back the student loans, but I haven’t made one payment yet because I still have all these bills lined up before that. I am not making enough,” he said.  Ouch – he has student loans to pay back?  Somehow, his academic plan didn’t seem to lead to an illustrious career.

Justin Johnson, who makes $7.60 an hour, says, “They’re not fooling us.”  Bleu Rainer started working at McDonald’s 8 years ago.  He’s now making $8.05 an hour. McDonald’s did just announce it will raise the pay of 90,000 of its US employees starting in July, meaning employees at its corporate-owned stores will earn at least a dollar more than the local minimum wage. But Bleu Rainer says, “Nice try McDonald’s! If those fat cats at McDonald’s think they will make us back down, they are wrong.”

Let’s look at some obvious flaws in this thinking:

I love the fact that a young person can start at McDonald’s and get training in customer service, cleanliness, inventory control, handling unexpected crises, being taught the power of a smile, showing up on time and learning the importance of personal responsibility.  Many employees there are recognized for exemplary skills and are recruited on the spot by observant customers.  But this is not a likely place for someone to move into high level opportunities and it is not a place to demand a doubling in pay just because you “need” it for a comfortable lifestyle.  Accept the training, polish your personal skills, make yourself more marketable and prepare to move into something a little better.

Amazon founder Jeff Bezos started out working at McDonald’s, and he recently told Fast Company that ”one of the great gifts I got from that job is that I can crack eggs with one hand. My favorite shift was Saturday morning. The first thing I would do is get a big bowl and crack 300 eggs into it.”  With a current net worth of $34.7 Billion he apparently learned some other valuable skills along the way.  Sharon Stone, Jay Leno, Seal, Pink, Star Jones, Shania Twain and race car driver Tony Stewart all worked at McDonald’s on their way to something better.  Politician Paul Ryan worked at McDonald’s during his sophomore year of high school.  He just announced he won’t be running for President in 2016 but as a nine-term congressman he still may take a shot in the future.  Yeah, McDonald’s is a starting point – not a final destination.  Focus on improving your skills and marketing yourself for new opportunities.  Don’t waste your time demanding double pay for the same work.  The negative energy will damage you and McDonald’s will find plenty of people willing to take your spot when you’re gone.