Have you Decided to be more successful next year?

Often, we have someone call our office about making a change in his or her life.  We send information and then hear nothing.  Two years later, that person calls and says, “Now I’m ready to really create a plan.”  What I always wonder is, What did they do for those two years?  And usually, when we meet, it confirms my suspicion that they simply continued doing what they had been doing.  We know that we all have a tendency toward continuing the status quo. 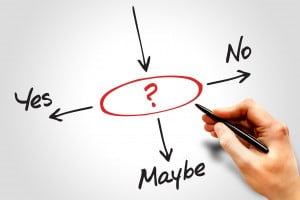 There is a book titled Five Frogs on a Log.  The essence of the book is this:  Five frogs were sitting on a log.  Four decided to jump off.  How many were left?  And it goes on to suggest that there were still five frogs on the log.  There is a difference between “deciding” and “doing”.

Now is a great time to clarify your goals for next year.  In fact, I would suggest that you decide now to have your goals for 2016 set by November 14th.  And Do it!  That way, you can enjoy the holidays with the confidence that you know what you are going to accomplish next year.  And you know what will happen?  You will actually start the process on some of those in the remaining 48 days of this year.  What an exciting way to start a new year!

There is considerable evidence to indicate that expectations of your future do, in fact, tend to create your future. People usually end up pretty much where they expect.  It seems reasonable then, to spend some time determining specific, worthwhile expectations that will make your life more meaningful.

“It takes as much time and energy to wish as it does to plan.”   Eleanor Roosevelt

Are you a goal setter? Do you typically set goals at the first of the year? If not, why not?

If you need some help in the process of getting started, we’ll be sending out a Goal Planning Guide in the next few days.