The new 48 Days Eagle has landed

This last Thursday we unveiled our new 48 Days Eagle.  We had a packed house for Innovate who got to share in the unveiling. 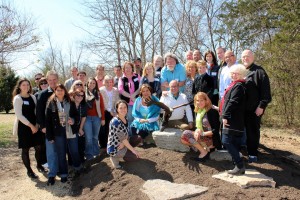 When sculptor Scott Stearman and I first started talking about this piece we discussed the different eagle perspectives he could use.  He said he could capture the magnificence of the eagle while soaring through the air where one wing was just brushing a tree for the support structure.  I said No that’s not what I’m looking for.  He said he could do a sitting eagle – where we would be able to admire the beauty of this amazing bird.  I said No I have plenty of sitting eagles and that just doesn’t have the feel I’m looking for.  I wanted something that would be a symbol of what we think, represent and want to share at 48 Days.

Then Scott said How about an eagle that is just pushing off, just ready to take flight?  It’s past the point of no return.  The eagle’s center of gravity would be way out in front – he is committed and has no option now except to fly. Not only is the eagle pushing off and it’s too late to change it’s mind and go back to where it was, but he’s looking forward.  He’s not looking at where he’s been but he’s looking forward to the new place he’s going.  And I said – That’s exactly what I want.  That’s what I want this eagle to convey.

Scott warned me that somewhere in this process of creation, this eagle was going to go through an ugly stage, a time when it would actually look like a “sick chicken.”  And I said I love that.  I want people to be reminded that when we start toward our dream it doesn’t just show up in the beautiful completed form. We go through a process where it’s a mess – it really is a “sick chicken.”  And yet this defines the creative process, the release of our art – and the walk of faith – where we don’t know exactly what the end result will be but we just take that next step anyway.  There are moments when we aren’t sure what it’s going to look like, but we stay focused because we’ve gotten a vision of the end result.

This eagle is a perfect visualization of our 48 Days message – we want you to dream, imagine, plan, act and Launch.

What is the image that conveys your core message?