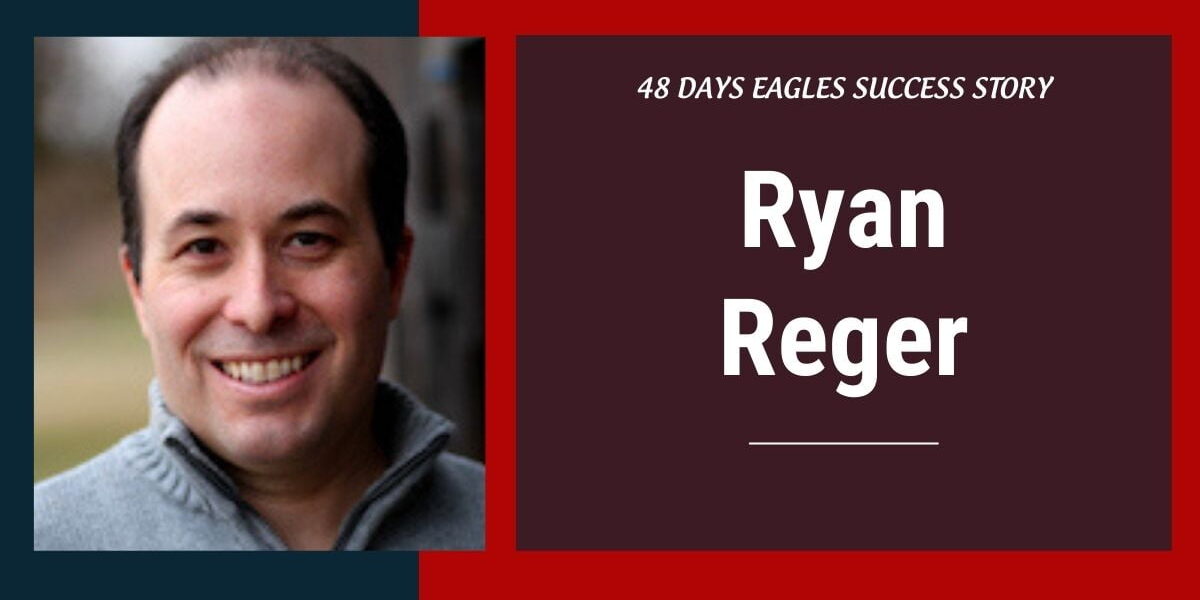 As we’ve seen over the course of the past few years, many Americans are unhappy with their jobs or looking for something else to do as a career. The experience of working from home has opened many people’s eyes to what they’ve been missing out on in their kids’ lives, in their family—and really just how much of life has passed them by while they’ve been at work.

Ryan Reger is a 48 Days Eagle who was way ahead of the curve on this trend! All the way back in 2008, Ryan realized that he wanted to have a career that gave him the freedom to be home with his family, and now he’s built a business that helps other people do the same.

Looking for Something More

Ryan’s journey to finding the work and life he loves began after he managed an unsuccessful political campaign, and he realized that he didn’t want another “real job.” A real job in that career path is one that demands so much of your time, energy, and headspace that it takes you away from all the other amazing things in your life.

With his wife, Melane, and his mother-in-law, Ryan began selling furniture on Craigslist. It started as a part-time venture, but by 2009 they had done over $250,000 in sales just in the Dallas-Fort Worth area! They soon expanded into selling furniture nationwide, and on other platforms like Amazon and eBay. What propelled Ryan’s business was not only his faith and his family, but also his tenacity in learning all about online selling.

By 2012, Ryan had become really knowledgeable about selling on Amazon specifically. He started using a program called “Fulfillment By Amazon” which allowed him to sell all kinds of things as a third-party seller on that platform. While this was a successful business, Ryan discovered that his true passion was serving. He knew that his knowledge about online selling could help others find the same freedom from the typical 9 to 5 that he so enjoyed, and he wanted to share that message.

Ryan wrote a book, called Streams of Income, where he breaks down three major business models for online selling, and he’s built that concept into a podcast by the same name which has over 120 episodes! Now, he has 16 streams of income, and that diversification and investment in his business’s success allows him to be home with his son, Callen, who was born in 2017.

I love Ryan’s story because he’s a great example of someone who started with the big picture of what he wanted his life to look like, and worked forwards from there to build it.

And, for Ryan, it doesn’t stop there.

He wants to share that success with those around him. His biggest question for his audience is always, “How can I serve you?” because serving others is his true passion. He tells people, “Whatever your dream is, I want to be here to push you in the right direction and point you toward resources that will help you fulfill your dreams.”

As a member of the 48 Days Eagles community, Ryan has participated in our Coaching Mastery program, where he gained more insight into how he can serve others as a coach; and he’s provided support, guidance, and resources to his fellow Eagles in so many ways. He’s shared his insight and knowledge with the Eagles on Monday Mentor calls, during office hours, and even led an Eagle’s Nest.

Ryan also does this in his own business. He recently launched a virtual assistant sharing program that helps business owners find and hire trained VA’s who can support them with the day-to-day tasks of running their business. Even better, Legendary VA’s provides well-paying jobs for underserved populations in countries like Malaysia by connecting them with entrepreneurs here in the states.

He’s also sharing the knowledge he’s gained over the years through his podcast, Streams of Income, in his newsletter and blog, and through webinars and trainings that bring the latest information about online selling to his audience.

This week, I challenge you to look around you and, like Ryan, ask others, “How can I serve you?”

You can find out more about Ryan and his business at RyanReger.com

• Marianne Renner: From Potential Job Elimination To a Thriving Side Business

• Helping Others Thrive is the Hallmark of Jevonnah Ellison’s Success