Many of you are writing books or magazine articles.  Never forget the importance of having a great title.  A great book can do poorly because of a less-than-stellar title.  Here are some examples of titles that were changed – you’ll recognize the new ones:

Tomorrow is Another Day – became Gone With the Wind.  And Scarlett’s original name was Pansy.

Something that Happened – become  Fitzgerald’s The Great Gatsby

Mistress Mary, taken from the classic nursery rhyme, was the working title for Frances Hodgson Burnett’s The Secret Garden.

To Kill a Mockingbird was simply Atticus before Harper Lee decided the title focused too narrowly on one character.

Ayn Rand thought her first title, The Strike, gave too much plot away, and renamed her novel Atlas Shrugged, at the suggestion of her husband.

Alex Haley’s influential 1976 novel was changed from Before This Angerto the much more diplomatic Roots: The Saga of an American Family.

Catch 22 was originally Catch 18.  But another book was being published at the same time with 18 in the title so at the last minute, they changed it to Catch 22.

It’s also not unusual for books to have different titles in different countries – even if the same language is spoken. 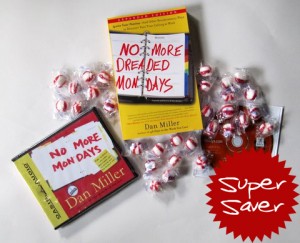 When I wrote No More Mondays, Random House won the bidding war based on my manuscript titled Revolutionaries at Work.  I loved that title and wrote the whole book with that name.  At the end of each chapter I had questions and next steps for those who were Revolutionaries at Work.  When the manuscript was completed and ready to go to print we did some small focus groups to get feedback.  The overwhelming image brought to mind when people saw that title was of some disgruntled employee walking in the door with a machine gun.  Terrorist acts were prevalent and that’s the first thing people thought of.  Definitely not what we wanted.  We had some brainstorming sessions with the publishing team and came up with the new title – No More Mondays.  When that book went to paperback after two years, we again discussed whether there was a better title.  We ended up just adding the word “dreaded” for No More Dreaded Mondays.   The text is exactly the same – you’ll notice the original name on the still current audio.

Lots of books have had titles changed after a couple of years of being on the market.  We’ve thought about changing the title of Wisdom Meets Passion.  I think it may be the most important book I’ve written but it never took off in sales.

Any ideas?  And no, I’m just kidding about Purpose Driven Life. I hear that’s already been used.