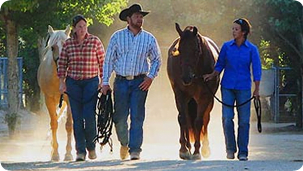 When Monty Roberts was in high school, his teacher gave the class the assignment of writing about what they wanted to do when they grew up.  Monty wrote that he wanted to own a ranch and raise thoroughbred racehorses.  His teacher gave him an “F” and explained that the dream was unrealistic for a boy living in a camper in the back of a pickup truck.  He would never be able to make this a reality.  When he offered Monty the chance to rewrite his paper for a higher grade, Monty told him, “You keep your F; I’m keeping my dream.”

Today, Monty’s 154-acre ranch in Solvang, CA, is home to world class thoroughbred racehorses and his gentle “Join Up” methods of training horses (and kids) is the inspiration of companies around the world.  He and his wife Pat have raised their own three children as well as 47 foster children, who return regularly to spend time on the ranch.  As the “Horse Whisperer” he inspired the Robert Redford movie that propelled Monty to fame and fortune beyond his wildest boyhood dreams.  https://www.montyroberts.com

Three years ago Carrie Olsen dreamed of being able to be a stay-at-home mom but still contribute family income.  She and her husband Derek came to the Sanctuary and started shaping that dream.  Carrie discovered she was interested in voice acting, found a coach, started working nights and weekends and quit her job just 4 months later.  She has worked with Disney, AT&T, K-Mart, Taco Bell, Kaiser Permanente and more, and last year (2016) generated $104,000 in revenue!

Now who’s been trying to talk you out of your dream?  Who’s been telling you you’re crazy and it can’t be done?  What level of success is that person experiencing?  Do you notice that most naysayers and dream kickers are at the bottom themselves?  Find people who are already performing at the level at which you’d like to be.  You will find they will encourage and inspire you even more.