Share
Tweet
Share
Pin
Share
0 Shares
Here’s a note I just received from Aaron Killian – and I’m sharing this with his permission –
Dan,
I hope you’re doing well! I wanted to follow up with you with regards to my “coffee bag resume” that I sent you in November of 2011.
The coffee bag resume *did* work! 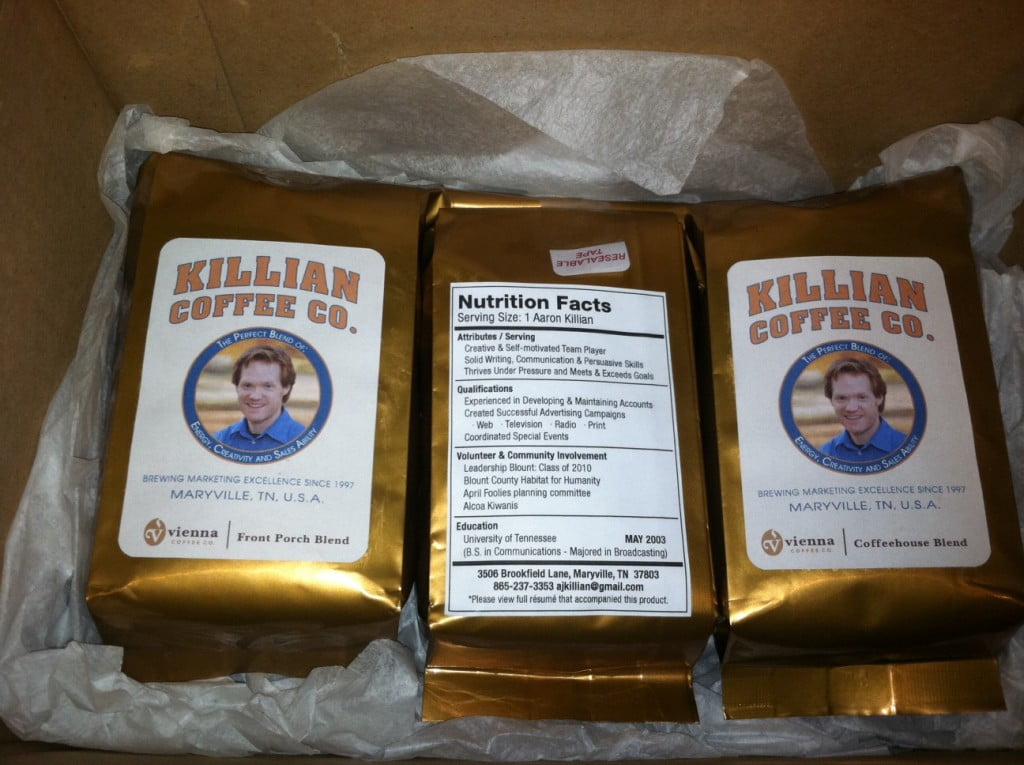 I have a degree in Broadcasting from the University of Tennessee, but straight out of college, I took a job producing educational videos. It was a great “j-o-b” for four years, but not quite the calling I wanted for my life. Then I took a position as a marketing director with an area nonprofit for about five years, but I always wanted to get into the world of broadcasting

However, I couldn’t quite figure out how to get noticed and differentiate myself from the dozens of resumes these media outlets get on practically a weekly basis.

Then one day after reading 48 DAYS TO THE WORK YOU LOVE I had an idea: I’ll slap my face on the front of a coffee bag, put my resume on the back, and send it out to area media outlets.

Wouldn’t you know it: IT WORKED!

In fact, with a little follow-up, I received over half a dozen interviews because of that coffee bag resume! (One media outlet was so impressed that within a week they interviewed me for three different positions with their company!)

Ultimately, I landed with the number one radio group in the market as they were so impressed with my skills that they CREATED a position for me.

After eighteen months with them, a local television station took notice of me, approached me about a position with them, and after a handful of interviews, they offered me a position.

I’ve been in my current position almost a year, and I feel that your books and strategies inspired me to do things a little differently in my job search.You’re the one who inspired me to find new ways to think outside the box and send in something other than just a plain old resume and cover letter!  I wouldn’t be where I am today without you, Dan Miller!

All the best,  Aaron