Many years ago in a small Indian village, a farmer had the misfortune of owing a large sum of money to a village moneylender.  The moneylender, who was old and ugly, fancied the farmer’s beautiful daughter. So he proposed a bargain. He said he would forgive the farmer’s debt if he could marry his daughter. Both the farmer and his daughter were horrified by the proposal. So the cunning money-lender suggested that they let providence decide the matter. He told them that he would put a black pebble and a white pebble into an empty money bag. Then the girl would have to reach in and pick one pebble from the bag. 1) If she picked the black pebble, she would become his wife and her father’s debt would be forgiven. 2) If she picked the white pebble she need not marry him and her father’s debt would still be forgiven. 3) But if she refused to pick a pebble, her father would be thrown into jail until the debt was paid. 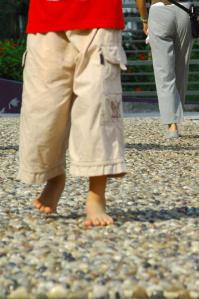 They were standing on a pebble strewn path in the farmer’s field. As they talked, the moneylender bent over to pick up two pebbles. As he picked them up, the sharp-eyed girl noticed that he had picked up two black pebbles and put them into the bag. He then asked the girl to pick a pebble from the bag. Now, imagine that you were standing in the field. What would you have done if you were the girl? If you had to advise her, what would you have told her?

Take a moment to think through this story.  I’ve used it with the hope that it will help you see alternate solutions beyond the obvious. The girl’s dilemma cannot be solved with traditional logical thinking.  You may be in a similar situation.  You may be in a job you hate – but the pay is great.  You have two choices (1) You can stay in a job you hate.  (2)  You can leave the job but will then give up the great pay.  Are these really all the options?  What would you recommend to the Girl to do? Well, here is what she did ….

The girl put her hand into the moneybag and drew out a pebble. Without looking at it, she fumbled and let it fall onto the pebble-strewn path where it immediately became lost among all the other pebbles. “Oh, how clumsy of me,” she said. “But never mind, if you look into the bag for the one that is left, you will be able to tell which pebble I picked.” Since the remaining pebble is black, it must be assumed that she had picked the white one. And since the money-lender dared not admit his dishonesty, the girl changed what seemed an impossible situation into an extremely advantageous one.

Now, what about your situation?  A couple of years ago I saw a very “successful” media executive.  Because he was so respected he had been given increasing responsibilities over the years.  He came to me with a dilemma.  His current position had squeezed out all his family and community commitments.  He was working 70-80 hours weekly, but he had also become used to the $180,000 in annual pay.  He was considering whether to just accept his lot in life, or to quit his job, give up his salary and seek a more balanced life.  I proposed another choice.  Since he was highly valued, why not approach his superiors with a new solution.  Delegate much of his weekly work load to allow him to contribute in his highest “areas of competence.”  They readily agreed – he was able to go back to a 40 hour work week; he began playing the cello professionally again, he volunteers in his son’s school, he plays in occasional golf tournaments and he manages his church bookstore.  Simply by asking for a less-than-obvious solution, he was able to move into a new season of true “success.”

MORAL OF THE STORY: Most complex problems do have multiple possible solutions. It’s only that we don’t attempt to think outside the obvious choices.