Honesty compels me to confess that I had never listened to a single episode of this guy’s podcast.

Yet there I was sitting in a Chipotle parking lot trying to decide if I would go inside and meet him.

It all started a few years back when I began listening to podcasts.  Dan Miller’s “48 Days” was the first or second one I ever heard.  It was also the only one I listened to consistently over the next 4 years.

So I must have heard this dude mentioned on Dan’s show.  And at some point I must have sent him a friend request on Facebook.  That’s why I saw when Cliff Ravenscraft posted that he was in town for Kent Julian’s “Speak It Forward Bootcamp”.  Furthermore, he was staying an extra day to meet up with any Facebook friends who wanted to join him for dinner.

Anyway, I finally saw a man that resembled the caricature I had seen on Facebook.  He met someone at the door and proceeded to chat.  I decided it was “go time”.  I walked up and introduced myself to Cliff Ravenscraft and Doug Payton. 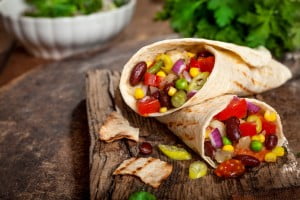 Minutes later a brother and sister, Riley and Bethany, joined us.  Bethany asked me how long I had been a part of Cliff’s GSPN Community. I don’t remember what I said, but the real answer would have been “about 10 seconds”.

Cliff led us to the counter and was waiting at the cash register to pay for each of our meals!   I was starting to feel like a part of the community already.

The five of us sat around a table that evening.  Cliff asked each of us about ourselves.  Then he shared some of his stories of both struggle and encouragement.

The thing I remember most is when he talked about The Law of Reciprocity.  It went something like this…
Cliff:  Have you ever been punched in the face?
Me:  Does it show?!  (My actual response wasn’t that witty.  I think I just said “yes”.)
Cliff:  What did you want to do to the person who punched you?
Me:  Punch him back.
Cliff:  Yes!  But you wanted to punch him back harder!  Right?
Me:  Yes!

That night I went home and signed up for Cliff’s GSPN Plus membership at $10 per month.  He had long since made paying for his content optional, but I wanted to express my gratitude.

I immediately started binge listening to Podcast Answer Man.  I learned so much and I wanted to learn more.  Three months later I enrolled in Cliff’s Podcasting A to Z Course for $897.

I met several new friends during the course and later in the Podcasting A to Z private Facebook group.  Those relationships led to my first paying clients as I really started to believe I could be a Podcast Coach.  It also led to an awesome paid gig behind the mic.  I actually got paid to watch one of my favorite TV shows and talk about it with my co-host!

I have since had the pleasure of helping people in several states and on three continents.

And it all started with a $5 burrito that turned out to be worth so much more!