Here’s an interesting solution you may be able to adapt to a domestic or work situation.

Two neighbors had adjoining farms.  One raised wheat – he also had children and large dogs.  The other farmer raised sheep. 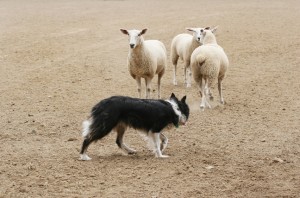 The sheep farmer was in a quandary because the dogs next door kept running into his pastures and frightening the sheep.  He spoke to his neighbor but the forays continued.  He thought about taking the neighbor to court.  He even thought about poisoning the dogs.  Then one day he thought of a solution.

Some new lambs were born and the sheep farmer gave each of his neighbor’s children a lamb as a pet.  They were delighted!  Because of the pet lambs, the father could no longer let his own dogs run amok.  He restrained them and taught them to leave the lambs and the sheep alone – and everyone lived happily ever after.

— Adapted from The Best of Bits and Pieces (The Economic Press)