When Tim Ferriss was 12 years old, an unidentified caller left this Jim Rohn quotation on his answering machine:  “You are the average of the five people you spend the most time with.”

That message changed Tim’s life forever.  At only 12 years old, he recognized that the kids he was hanging out 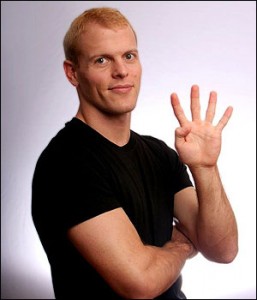 with were not the ones he wanted influencing his future.  His school intensity changed.  He spent his junior year in Japan studying Zen meditation.  He was accepted at Princeton University where he became an all-American wrestler and a national kick-boxing champion.  At age 23 he founded BrainQUICKEN, a sports nutrition company which he then sold eight years later.  At age 29 he wrote the best-selling book – The 4-Hour Workweek and is now a full-time angel investor.

“Pay any price to stay in the presence of extraordinary people.” Mike Murdock, author of The Leadership Secrets of Jesus

So, do you want to be the average of the five people you are spending the most time with?  Have you gotten trapped around toxic people – people who are full-time members of the “Ain’t It Awful’ club?  People who are flag-carrying AmeriCAN’Ts?

Years ago I read Brian Tracy saying that one of the hallmark characteristics of successful people is to spend time with those who are already performing at the level at which you want to perform.  In 2002 (9 years ago) I attended Mark Victor Hansen’s MegaBook University.  I spent 3 days with people who were already successful authors.  Then I came home and did what I saw them doing.  In 2005 the first edition of 48 Days to the Work You Love was published.  In 2008 I got a fat contract with the biggest publishing house in the world – Random House – to publish No More Dreaded Mondays.  I’ve continued to attend writers’ seminars every year and now have a blast welcoming up-and-coming writers to our popular Write to the Bank events here on our property.  Today I can take my pick of publishers waiting for my next book.  I’m not smarter, faster or better looking – I just spend time around people who are living the life I want to live.