What we see as failure may actually be progress.

Thomas Edison was an inquisitive child at an early age.  He attended school for only three months where the 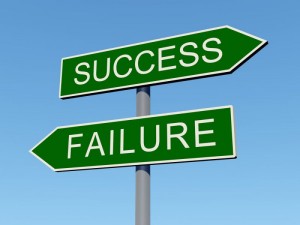 teacher labeled him as “too stupid to learn anything” quite possibly because of his early hearing problems.  His mother removed him from school and decided to teach him at home.  She encouraged him to read and he quickly developed a great interest in science, especially chemistry.  At 10, he set up a small laboratory in the basement of the family home.  At the age of 20, Edison set up a laboratory in Menlo Park, New Jersey where he spent his time a full-time inventor.

Within two years, he had 40 different projects going and was applying for over 400 patents a year.  In 1878, he boldly announced to the world that he would invent an inexpensive electric light that would replace the gas light.  Often ridiculed, Edison tried over ten thousand different experiments before he finally demonstrated the first working light bulb on October 21, 1879. When a reporter asked, “How did it feel to fail 10,000 times?’ Edison replied, “I didn’t fail 10,000 times.  The light bulb was an invention with 10,000 steps.”

Who could ever imagine where we might be today if Thomas Edison had not persevered after ten thousand failures?  It’s OK to fail.  From every failure comes the seed of an even greater possible success.  Robert Schuller compares this process to a high jumper approaching the bar.  If he/she always clears the bar, we really don’t know how high that person can jump.  It’s only when they trip the bar that we have a true measure of their success.  Without failure, we can never grow to our full potential.  Rick Patino, the great basketball coach says, “Failure is the fertilizer for success.” Embrace failure as a legitimate step in the right direction.

A few years ago I got to taste some of that fertilizer for myself.  I owned a 4,000 member health club, an auto accessories business and was very involved in our community and church.  Then some banking procedures were changed and I found myself in a frightening situation.  My businesses were sold at a fraction of their value and I was left with seemingly insurmountable IRS tax bills and supplier invoices.  Although advised to declare bankruptcy, I found it impossible to walk away from even my verbal promises.  Yes, the return to any real success took much longer than I ever expected.  But I am convinced that the journey through that was the training ground for my success today.

Have your “failures” gotten you closer to success – or have you become convinced you are a “failure”?