Are you in misery – move!

This story about the dog and nail is one of the most commented-on stories in The Rudder of the Day.

I heard a story from my friend Bob about an old dog lying on the front porch.  A neighbor approached the porch and could hear the dog softly moaning.  He asked his friend why the dog was whimpering.  And the owner said:  “He’s lying on a nail.” Predictably the man said, “Well, why doesn’t he move?” To which the owner replied, “I guess it doesn’t hurt quite that much yet.” 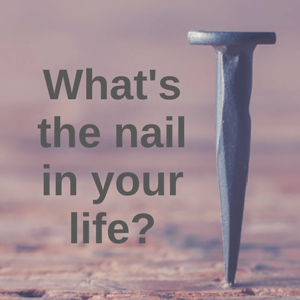 About a year after sharing this story in my weekly newsletter I had an attorney call me.  He said he was that old dog – very much in pain about his daily activities but the pain was still almost tolerable.  The image was so indelibly etched in his mind that he started every day identifying with that old dog.  We discussed his situation, his clear sense that he was off track and the necessity for dramatic change in his life.  He was seeing his family, his health, and his peace being eroded by his commitment to keeping things the same.  Yet six months later I was still waiting for him to begin the process of introspection and exploration of new options.

“If you don’t have a vision for the future, then your future is threatened to be a repeat of the past.” — A. R. Bernard

The comfort of familiarity can be so alluring; even if it is not the best.  I see countless people droning through their mundane lives, hanging on to their comfortable misery and blocking the thrill of new and unrealized but available successes.

I guess a lot of us are like that old dog.  We moan and groan about our situation, but don’t do anything.  How bad does the pain have to get before we get up and do something else?  In the workplace today there are incredible opportunities.  If we are in a negative environment, one that causes us pain and anguish, maybe it’s time to take a fresh look at ourselves, define where we want to be, and develop a clear plan of action for getting there.

“He who has learning without imagination has feet but no wings.” — Stanley Goldstein

What is that familiar but annoying nail that’s poking you today?  What could you do to get up and move?

Many of you have told us you want to launch your own idea this year.  Have you created a plan to do so?