Remember back to your high school physics class – Newton’s First Law of Motion – Inertia.  It’s why you fly 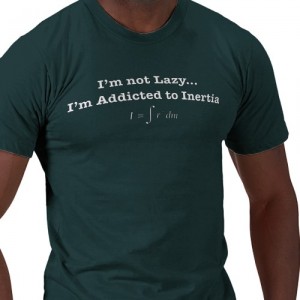 through the windshield when your car hits a brick wall.  It’s the resistance of any physical object to a change in its state of motion or rest.  It’s why you feel thrown against the back of the seat when your flight takes off.  Check out this cool video of raw eggs responding to inertia. Like objects, people also resist any change to their current position.  So people at rest will remain at rest unless an outside force causes change.  People in a current situation  will remain at that place, that speed, that income and that level of happiness unless an outside force causes change.

That’s why the guys at Saturn manufacturing stayed there until the day the plant was closed.  Many were wishing, hoping and dreaming that Roger Penske, General Motors or the government would come in at the last minute and keep things exactly the same.  I have a friend who has been in poor health but waited until a heart attack forced change.  And how many times have you seen someone overweight lose 50 lbs immediately only after the trauma of a divorce?  Why didn’t he take the initiative to look great while married?

Why do we allow inertia to keep us in circumstances that are less than great?  Inertia comes from the Latin word, iners, meaning idle, or lazy.  Surely you don’t want laziness to determine where you are headed – where you’ll be this time next year. Yes, I know, we may not see it as laziness but contentment with the status quo, “okay” relationships, busyness and sense that everyone’s struggling right now may be causing you to settle for less than the best.

“You must be the change you want to see in the world.”   Mahatma Gandhi